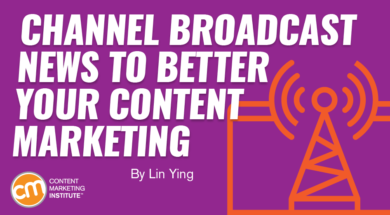 My switch from broadcast journalism to content marketing seemed like a logical and natural move. Both fields require many of the same skills – serving as a member of the grammar police, being deadline driven, writing well, and having an eye for detail.

Let’s explore seven techniques used by news producers that you should consider for your content marketing teams.

1. Use your competitor as a benchmark

When I was in broadcast news, there always was THE station to emulate. It wasn’t uncommon to hear in our editors’ morning meetings questions such as:

It’s important to know what your competitors are doing, especially the ones whose success you’re hoping to emulate. It’s not so much about echoing what they’re doing but allowing them to guide and inspire what you’re doing.

Having a competitor to benchmark against presents multiple benefits. It can help reinforce your judgment. It also can inspire coverage ideas and story angles to incorporate in your editorial calendar.

Use a competitor as a benchmark to inspire editorial ideas and examples, says @linyi_ng via @cmicontent. Click To Tweet

While the news industry uses benchmarks (i.e., Nielsen ratings) to quantify viewership, content marketers also use a rating system – search engine rankings. Evaluating which keywords your competitor’s content ranks for and how high they’re ranked is helpful to understand where your brand fits in the content landscape – and where you can improve your rankings.

Of course, using your competitor as a benchmark is only one form of evaluation and inspiration. It’s important to not let your sense of judgment get away from you, lest you end up a blind mimic.

2. Be relevant to the audience

If Swedish authorities announced the year-long closure of a major highway, it would be the top news story in Sweden that day.

But the media in Singapore would not run the story.

It’s simply not relevant. Other than a handful of Singaporeans who might travel to Sweden and rent a car, the news has absolutely no impact on the lives of the Singapore audience.

Similarly, the BBC story on the world’s most exquisite chocolate probably won’t make it to air in China where per-capita consumption of chocolate stands at 100 grams (3.5 ounces) per year. 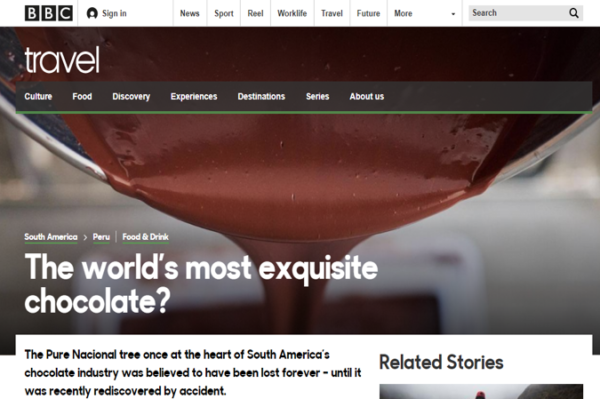 The same goes for content marketing. Just because a brand publishes an infographic that garners 1 million views doesn’t mean you should, unless, of course, it’s relevant to your readers.

You’re the marketing director of a company handling travel insurance claims. You wake one morning to find out Wow Air declared bankruptcy. A day later, a big global travel company publishes a post with a fancy infographic about the bankruptcy and illustrates how Wow Air travelers who are affected should file claims.

Within hours, the post receives thousands of shares and the infographic goes viral on social media.

Is it tempting to produce a similar infographic in hopes of emulating the success?

But before jumping into it, consider the relevancy of Wow Air’s bankruptcy to your audience. Your business is centered on flights and travels in Southeast Asia, where Wow Air never flew. A post on Wow Air doesn’t make much sense for your business and audience.

That’s not to say that you should ignore the topic of airline bankruptcies. Take advantage of the hype to tackle it from another angle that makes the story relevant to your readers. For example, produce a blog post discussing the bankruptcy and highlighting the role of travel insurance.

Take advantage of hype to tackle a popular topic from another angle relevant to your readers, says @linyi_ng via @cmicontent. Click To Tweet

HANDPICKED RELATED CONTENT: Will This Real-Life Search Turn Up a Keyword Ranking Opportunity?

When news breaks, the immediate angle is often clear. But as days go by and developments slow, news editors look for new angles that offer a different look at the story to freshen up their coverage.

The disappearance of Malaysia Airlines MH370 was big news. Media outlets all over the world interviewed aviation experts for their coverage of the Boeing-777’s disappearance. 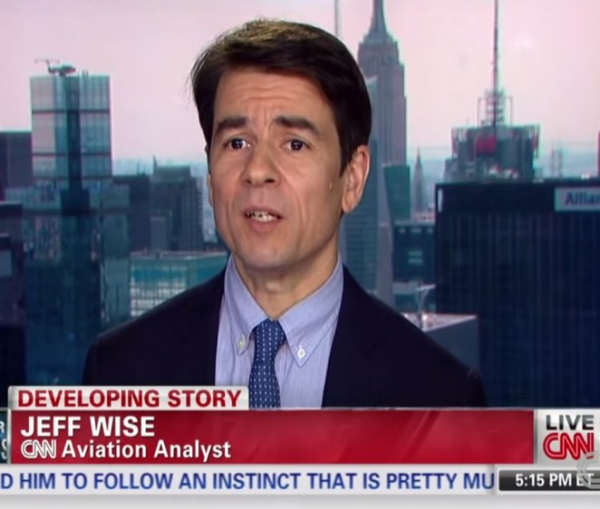 But after a few days and with almost every single outlet approaching the story in the same way, a new focus was needed. What could a news outlet offer that viewers hadn’t seen to hold their attention?

Eventually, the story moved beyond the aviation angle to focus on possible plane debris. CNN turned to oceanographers, who provided expertise – and a new angle – about a possible debris field.

If you can create content with a unique angle, one that your competitors can’t – or haven’t – you put your brand one step ahead as readers appreciate fresh, original content.

While you could do this in numerous ways, one tried-and-true method is using original research.

Let’s walk through an example. In the real estate sector, housing prices are a relevant but common topic. In these snippets, real estate and property law firms discuss housing price trends: 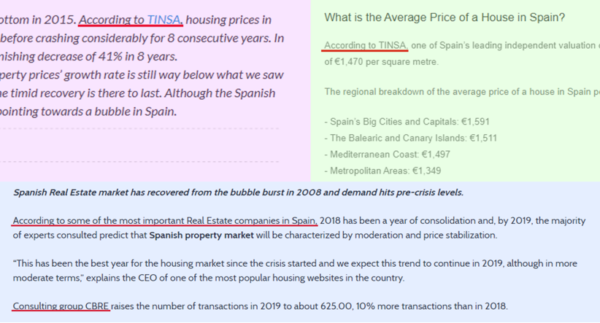 Each brand quotes statistics and reports produced by other firms.

It’s one thing to cite an external report. It’s a whole other ballgame to use your own data. That is exactly what idealista, Spain’s online real estate classified, does. It crafts a report on the same topic, but it uses internal data (i.e., something its competitors don’t have) as the basis. 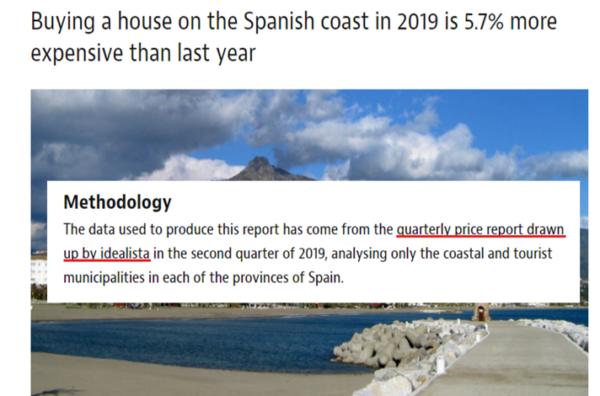 Other benefits of this fresh angle are that idealista’s content will earn mentions in other content (i.e., brand awareness) and links to its report (i.e., SEO) – and its competitors’ content won’t.

A better angle on a well-covered topic also could mean an innovative format. Idealista offers another best-of example in this case. It developed an interactive tool allowing visitors to input locations and other data and then see the evolution of housing prices for those criteria.

A good story isn’t just the reporter narrating the piece. In broadcast news, a variety of visuals (and natural sounds) is essential.

Let’s look at this example from an ABC News story about Greta Thunberg speaking at the United Nations Climate Summit.

A reporter simply reading the words of climate activist Greta Thunberg wouldn’t have the same effect as seeing and hearing the teen passionately say, “You have stolen my dreams and my childhood with your empty words.”

Similarly, the reporter brings context and uses clips of her speaking that meets the audience’s needs of understanding and timing. Simply watching a video of Greta’s speech would not have accomplished that.

To accomplish this news content creation, broadcasters often use a basic two-column scripting format – one for the visual script and the other for audio script.

Think about the broadcast process when you craft your content. You can create videos like a news broadcaster, but you also can bring the attributes to your static content. Think about visuals and format for every piece you create.

This simple example illustrates the visual impact of font sizes and formatting: 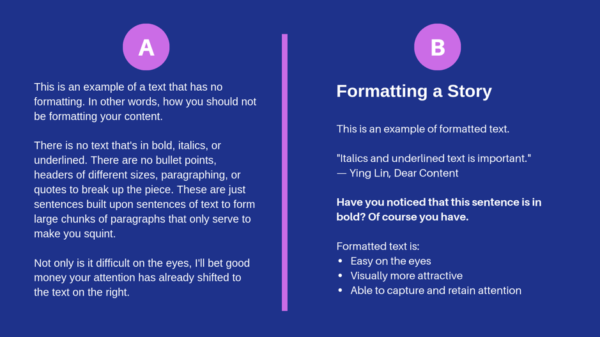 Hands down, B is much easier to read than A. Honestly, did you even get to the end of text A?

How can you make your content more appealing to your audience?

Images are one way to go. A ton of visual marketing tools are available that can help teams that aren’t blessed with professional designers. Apart from images, consider the visual impact of these tools:

To quote the Ethical Journalism Network, “Good journalism is only ever as good as our sources of information.”

The underlying principles of journalism are to provide fair, reliable, objective, and honest coverage. Every word out of a reporter’s mouth must be backed by a source.

Providing attribution tells viewers where the information comes from and gives credit where credit is due. This BBC piece on a German court case uses multiple sources to explain the allegations and the reaction to them. 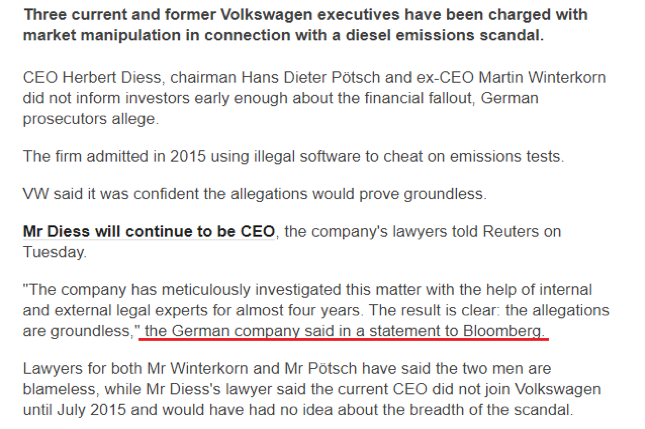 HANDPICKED RELATED CONTENT: Fact-Checking for Content Marketers: How to Protect Credibility in the Era of Fake News [Checklist]

Every year, the British Economist Intelligence Unit ranks countries by how livable they are. Media outlets across the world cover the rankings, but they don’t overwhelm their audiences with the raw data.

Here’s how Business Insider did the work for its audience and created a summary of the report: 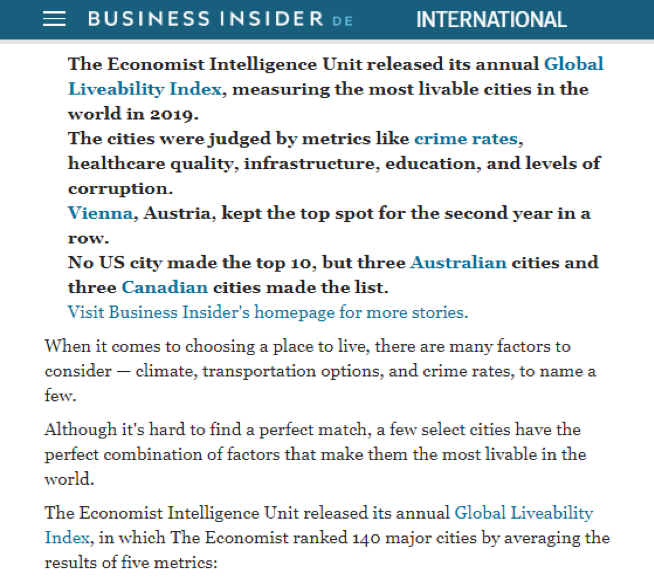 Business Insider packaged the information to deliver what most of its readers want (a summary) and link to what a few readers want (the raw data sets).

Similarly, content marketers can package content that takes all its raw information in a format for easier consumption.

Backlinko recently did that with its analysis of 5 million Google search results. Could the team have simply uploaded its raw data files? Sure. But who’s actually going to sieve through all of that? No one, probably. So Backlinko published an article. 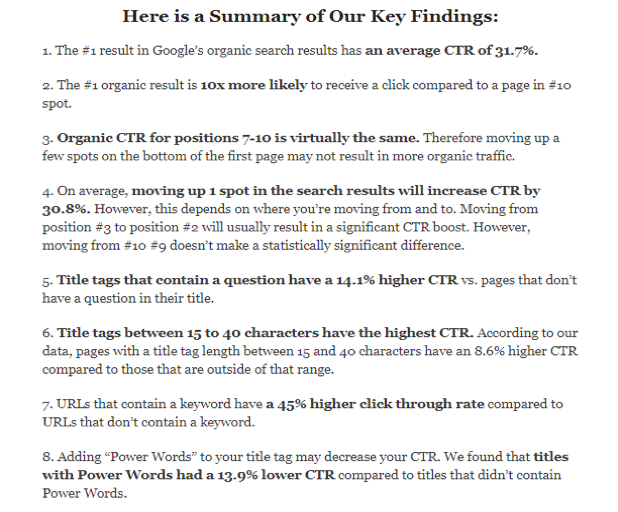 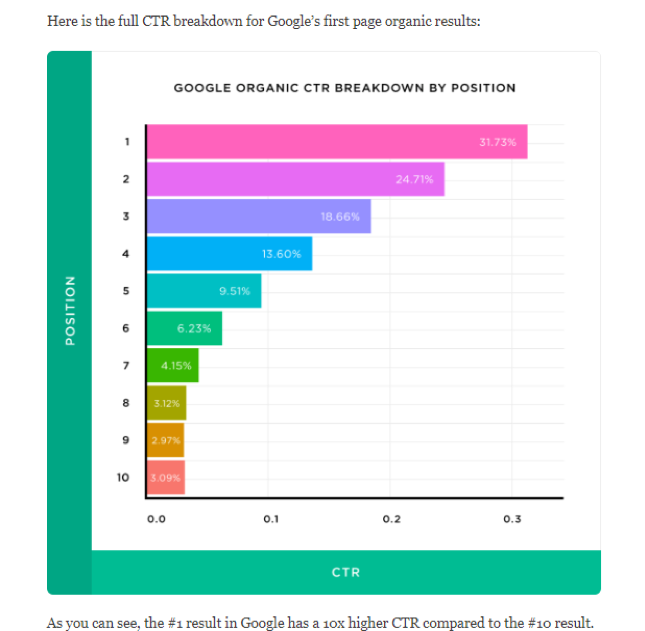 For just three minutes of on-air coverage, a lot of work goes into the production:

Given that, you can be sure news editors aren’t going to run the story in only one newscast. Whether it’s a hard news story about arrests of local officials or a softer story about baby pandas, news editors work to give it the maximum coverage it deserves.

They may tell the highlights of the story in one newscast and take unused content to produce a more in-depth story for the later newscast. Or they take a snippet of the story and tease it at every commercial break before they air it. And in today’s world, they package the stories for their social channels too.

Similarly, in content marketing, what takes the reader minutes to consume likely takes the team days, weeks, or even months to produce. It makes sense to maximize that work by giving it as much visibility as possible.

While there are no regularly scheduled newscasts in content marketing, plenty of distribution and repurposing methods exist. From social media and email marketing to paid ads, landing pages, and more, think about how to package the content in an optimal way for each distribution channel.

Take a page from the news production handbook

Going beyond the technicalities of writing, many more functional skills can be transferred from news production to content marketing.

Yes, impeccable grammar and proper punctuation are fundamental for all content creators. But don’t forget to appreciate the other lessons from the news production handbook, from using your competitors as benchmarks to maximizing your coverage.