From election interference on its site, to the improper harvesting of personal user data, to CEO Mark Zuckerberg’s multiple appearances before lawmakers — one might expect the company to take a hit.

But the various figures from Facebook’s Q2 earnings report — from revenue to daily and monthly active users (DAUs and MAUs) — don’t come as a surprise to many.

Here’s a look at some of the numbers — and what they mean.

Let’s have a look at some key figures.

According to the earnings call itself, 2.5 billion people use at least one of Facebook’s apps (e.g., Instagram and WhatsApp).

A Closer Look at Active Users

While Facebook points to the year-over-year increase in both DAUs and MAUs — 11% for both — and the worldwide totals did see small increases between Q1 and Q2, it’s important to understand where that growth is coming from. 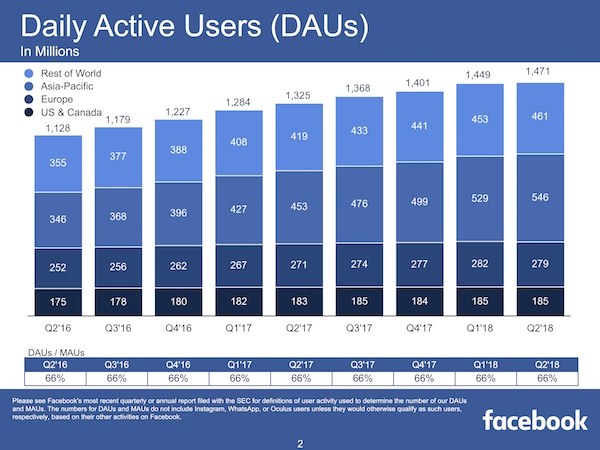 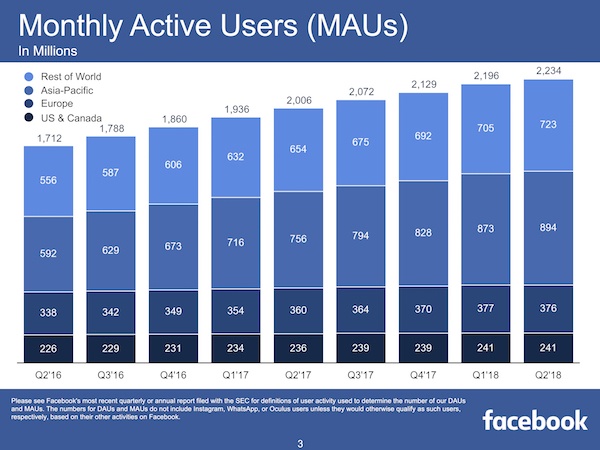 Growth in the U.S. and Canada has all but stopped, with no change between Q1 and Q2, which already showed signs of slowing in Q4 2017.

Active users also fell in Europe, which is likely due to the General Data Protection Regulation (GDPR), a new EU Regulation — which went into effect onMay 25 — which significantly enhances the protection of the personal data of EU citizens and increases the obligations on organizations who collect or process personal data.

DAUs declined in Europe, likely due to the implementation of GDPR. Facebook had warned about this. pic.twitter.com/8MX3aBqz8x

And while Facebook’s non-existent growth in the U.S. and Canada, to many, it comes as no surprise.

Facebook has warned of potential decreases time spent on the site, as well as a potential decrease in ad revenue — starting with a major change to its News Feed algorithm in January to emphasize content from friends and family, not brands.

if the company has warned for nine months that it is actively taking measures that reduce growth and curtail the spread of viral news, you cant be shocked that it will take a quarterly hit to user growth or revenue

Changes to the News Feed algorithm were only one piece of the many changes Facebook has said it has made (and will make) to its platform. Many efforts have also been made to curb the spread of misinformation and preserve election security on its site, as well as those to provide greater transparency around ads and promoted content.

During the earnings call, Zuckerberg remarked that since Facebook is “investing so much in security, that it will ultimately impact profitability,” noting that “we’re starting to see [that] this quarter.”

However, he also implied that effect on the company’s profitability doesn’t necessarily see an impact on product innovation, adding that Facebook doesn’t just “plan for the next quarter.”

While Facebook did show an overall growth in revenue in Q2 — an increase of 10.5% from Q1 — it did still miss its estimates.

Company executives showed hints of preventing that from happening again with some comments made during the earnings call, such as Chief Financial Officer David Wehner’s prediction that the company’s overall revenue growth will slow within the next two quarters.

An analyst asked for clarification on this, and what’s causing the deceleration. CFO David Wehner says that “a combination of factors” is driving it, like giving users more choices around privacy, as well as investments in new products and initiatives that can slow revenue growth https://t.co/JS4FC00P35

Amid these warnings, Facebook’s after-hours stock price continued to drop throughout the call, dropping over 20% about 45 minutes into it. 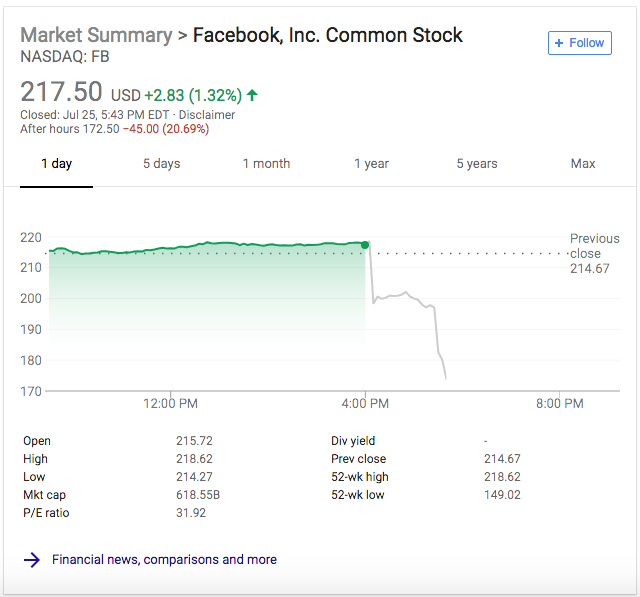 Facebook, meanwhile, has been steadily diversifying its sources of ad revenue, including ads in Stories, as well as Messenger. The company also announced earlier this year that it would bring a commercial break option to creators on its Watch platform — the revenue for which Facebook is expected to take its own cut.

What Else Happened Before the Call

In the months preceding the Q2 earnings call, Facebook was hardly spared of turbulence. While the Cambridge Analytica revelations did take place in Q1, the majority of the fallout occurred in Q2 — including Zuckerberg’s testimony to lawmakers in both the U.S. and the European Union.

The company’s leadership has also seen significant changes, including the looming (and much-discussed) departure of its Chief Security Officer, Alex Stamos — an internal memo from whom was published by BuzzFeed News the day prior to the earnings call. That same day, General Counsel Colin Stretch announced that he would be leaving Facebook.

Prior to these events, in May, Facebook’s executive org chart saw a major shuffle.

The week before the earnings call, Zuckerberg also gave a controversial interview with Kara Swisher, where he was accused of defending groups like Holocaust deniers, who he called “a set of people who … get things wrong, even multiple times.”

Zuckerberg later defended and “clarified” his comments, but it may not have been enough. The morning of the earnings call, an open letter to the CEO was published in The Guardian by two people whose live have been upended by the company’s seeming protection of these “set[s] of people” — namely, those who call events like mass shootings as hoaxes.

These factors — combined with wariness around Facebook’s decelarating growth — caused “all of Facebook’s gains this year” to essentially become erased in after hours trading,” according to Max A. Cherney of MarketWatch.

And as Frier pointed out toward the end of the call, Facebook had never before experienced such a fall in its stock price as a result of an earnings report — adding that if the drop lasted through the market opening the following day, it would “be the biggest post-earnings decline ever.”

What the lasting impact of this loss and this particular report will be remains to be seen — though Facebook’s executives continued to emphasize its successes and its investment in further innovations, paying particular attention to such video initiatives as Watch and IGTV.

There’s also Facebook’s growth in other geographical areas (beyond Europe, the U.S., and Canada) to consider, which was emphasized by executives, as well. Prior to the call, Hannah Kuchler of Financial Times pointed to this potential dichotomy, again bringing attention to the company’s growing number of advertising channels.

But if ad prices are rising and it can put ads in more places (stories, messenger, as well as instagram): does north american user growth really matter? https://t.co/VJv0k4Oatn

In other words — Facebook can rebound, especially considering its aforementioned, relatively strong performance following some of the biggest crises its experienced in the company’s history.

As Recode‘s Kurt Wagner pointed out the morning of the earnings call, “there are two simple, measurable ways that Facebook could have been punished for all of its stumbles these past 18 months,” which essentially amounted to either advertisers or users taking their business (and time spent) elsewhere.

And while a 23% drop in the stock price after hours could be considered a punishment by some — and time spent did show signs of a drop, such as the slowed user growth in thee U.S. in Canada — there are still markets where Facebook hasn’t quite reached market saturation.

“The core network can reach saturation in markets like the U.S. but it can still grow in emerging markets, which is why the company has invested in internet access in developing countries,” says HubSpot CMO Kipp Bodnar, alluding to such initiatives as Facebook’s work on its own internet satellites.

“Between the growth of developing countries and the expansion and growth of other properties like Instagram, What’s App and Messenger,” Bodnar continues, “Facebook can continue to grow revenue.”

But where there is still room for growth, some, like HubSpot VP of Marketing Jon Dick, say there there is an equal risk for audience fatigue, as well as considerations of Facebook’s long-term sustainability as an advertising platform.

“Showing more ads to the same people,” he says, “is a recipe for quickly having fewer people to show those ads to.”